Rogers was also delighted with the purchase of the Silver Six; not only because it was considerably more comfortable and safer than any of Tarky`s previous cars but, as Funghi was a regular trade contact of Rogers due to the near continuous purchasing of spares for Tarky`s motors, Rogers had of course made sure he received an ‘introduction fee’ from a very grateful Funghi.

This added very nicely to the cuts he received from every supplier and contractor that dealt with the Tythringtons and to which could be added his usual percentage on every spare part he had to obtain for Tarky`s eclectic car collection. Not to mention the very useful sum from the quarry owner for the ‘written off’ Tythrington Special and Tarky`s very generous bonus for ‘saving his life’ at the hillclimb. “Not bad at all!” muses Rogers as he mentally adds up his considerable additional income for the year.

Tarky, oblivious as usual to the potential for disaster, accelerates the Silver Six hard out of the main gateway and swings onto the main road which immediately leads to the rear of the car sliding on the treacherous surface, causing Tarky to swiftly back-off the accelerator to regain control and sending slugs of un-burnt fuel into the exhaust system which promptly ignite like a rapid volley of rifle fire. Unfortunately, the horse attached to the local dairy`s delivery cart parked across the street instantly assumes this noise is a major assault on it`s health and duly bolts off down the road with the milkman in hot pursuit!

Tarky eventually settles into the driving and dealing with the parlous state of the frozen roads, making steady progress through a stark wintry, rural landscape and passing through numerous villages where cottage chimneys spout little columns of smoke which rise vertically to meet with the thickening snow clouds above.

Three hours or so later and having completed about sixty miles of their journey in a fug of cigar smoke and regular tots from Their hip flasks, Tarky decides it`s time for a spot of lunch and brings the Silver Six to a stop in a farm gateway. Rogers retrieves the hamper from the back of the car and they spend a very pleasant half an hour chatting about cars and tucking into the rather sumptuous collection of cold cuts, pickles, duck in aspic, meat pie, filled rolls and fruit cake all washed down with a rather decent bottle of French red.

As they finish their lunch a concerned Rogers draws Tarky`s attention to the flakes of snow now appearing on the windscreen from an increasingly darkening sky and Tarky jumps out of the car for a “comfort break before we continue”, quickly joined by Rogers for the same reason. Standing at the gate Tarky lets out a quiet exclamation as he spots a pheasant patrolling near the base of a wall on the opposite side of the field. “Soon have that bugger bagged for the pot!” he says, pulling the Webley from his pocket as Rogers looks up to see what his master is talking about. Tarky, arm extended, takes aim and opens fire. The first four shots are wildly off target but the fifth thuds into the frozen earth just a yard from the bird which immediately takes flight, making Tarky`s optimistic, sixth and final snapshot clear the wall by some margin and continue to travel across the following field out of sight to impact the chimney pot of the local farm cottage. The shattered pot collapses into the flue itself which happens to coincide with the precise moment the farmer`s wife is retrieving a Christmas cake from the oven and who is immediately engulfed in the cloud of soot spewing from the open stove door and filling the kitchen!

“Never could hit anything; worth a try though!” chuckles Tarky as they climb back into the Silver Six and carry on with their trip…

A couple of increasingly difficult hours later and the weather has deteriorated to a point where daylight has all but disappeared, the new-fangled electric lamps are making little impact on the gloom, the blizzard is in full force and Rogers is working the hand-operated windscreen wipers in a losing battle at attempting to maintain a semblance of forward vision as they struggle along at barely ten miles an hour. “Not far to go now Rogers” says Tarky, as he alternates peering through the windscreen with sticking his head out of the open drivers door window in an effort to spot the verges of the minor road that will eventually take them to ‘Buglands’.

With Tarky`s concentration momentarily broken by his decision to have another quick tot and fishing around in his pocket for his hip flask, the car slowly moves to the offside edge of the road and gently rides up the verge for a few seconds, eliciting a muffled thud from the front end.

As Rogers turns to Tarky to enquire about the noise, the squirrel that only seconds before had been happily balanced on the lower branch of a tree in the hedgerow at the edge of the road, and that had been swept off it`s perch by the Silver Sixes errant front end, finishes it`s sudden surprise journey across the top of the wing by pirouetting around the mirror on the drivers door, flying through the open window, landing four square on Tarky`s face with a soggy splat and deciding that was as far as it was prepared to travel by digging in for dear life with all it`s claws and emptying it`s bowels for good measure! Rogers would later claim that Tarky`s scream had probably cleared the snow from the windscreen, in any event, it certainly moves the startled squirrel to release it`s grip of Tarky`s head, with Rogers quickly grabbing the unfortunate creature before it can reattach and popping it gently out of the door as Tarky brings the Silver Six to a slithering halt. Resting just long enough for Tarky to regain his composure and to clean up a bit, Tarky and Rogers soldier on and eventually pull up in front of ‘Buglands’ half an hour later. 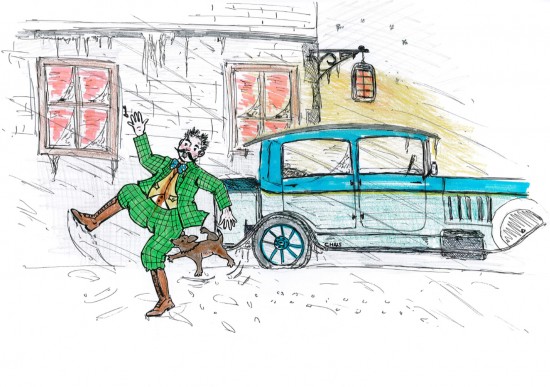 Rogers alights from the Silver Six and begins to remove the sacks of Christmas presents from the back of the car as a very damp, poop stained, scratched and bloody Tarky gets out to be greeted by the memsahib. “Well! I know you weren`t looking forward to this visit but you could have made an effort to look tidy?” she remarks, immediately turning on her heels in disgust before he could reply and marching straight back to the house! Summoning up a Herculean effort to refrain from starting something that would most likely end with a judge saying “…and may God have mercy upon your soul”, a defeated Tarky walks around to the rear of the car to help open the luggage trunk and promptly fumbles the key with his chilled fingers, dropping it into the snow at his feet. Bending over to retrieve the key, he unwittingly presents Bobby, a Jack Russell, with a near identical looking cushion to the one that ‘Little Willi’ uses to play with the young dog and who immediately sinks his teeth into his favourite target.

Meanwhile Rogers, who has reached the waiting staff at the top of the steps leading into the house, turns around on hearing Tarky`s latest screams to witness the extraordinary sight of his master stood in the middle of a blizzard whilst spinning like a Whirling Dervish and with a Jack Russell clamped firmly to his arse!

Also did you know that by simply pressing the Facebook Like or Google+ buttons below, it not only lets your friends know you like something, it also makes it easier for them to find as well.

Flywheel Memories of the Open Road

The annual Classic Motor Show at the NEC is clearly in a lot of people’s diaries because even on the Friday, a day normally more closely [Read More]

Although everyone readily accepts the heritage of manufacturers such as Jaguar, Porsche and Alfa Romeo it is perhaps too easy to fail to recognise ‘newer’ brands such as Mitsubishi [Read More]

In maintaining our love of events large and small and in the run up to the big one for us this year, the Le Mans [Read More]

For us of course that meant driving a classic, our 1977 TVR 3000M, in the HSCC 70s Roadsports but the lessons we learned can be [Read More]

Each year the TVR Car Club’s Wiltshire region, under the leadership of David Border, organises a local event with a truly national draw and this [Read More]

VW Campers for Hire in London

© ClassicCarsDriven.com. A Tradename of Nitech Technical Services Ltd. A company registered in England and Wales (Registration No. 03242795).